While I love stuffed vegetables — especially peppers and pumpkins — I rarely make them. The baking part takes too long, which means dinner won’t be on the table till late, and the hubby will start eating all sorts of snacks before dinner. Does this sound familiar?

You can get clever about it, though.

For example, on a weeknight, I’d make the pilaf and skip the stuffing-into-peppers part. It’s just as delicious and satisfying, but it gets into my (and my husband’s) belly much quicker. Which keeps us both happy and sane.

And I’d reserve stuffing the veggies for the less-busy weekends, or, more likely, when I’m having people over for a meal. Because, besides being delicious, they look rather glamorous, don’t you think? 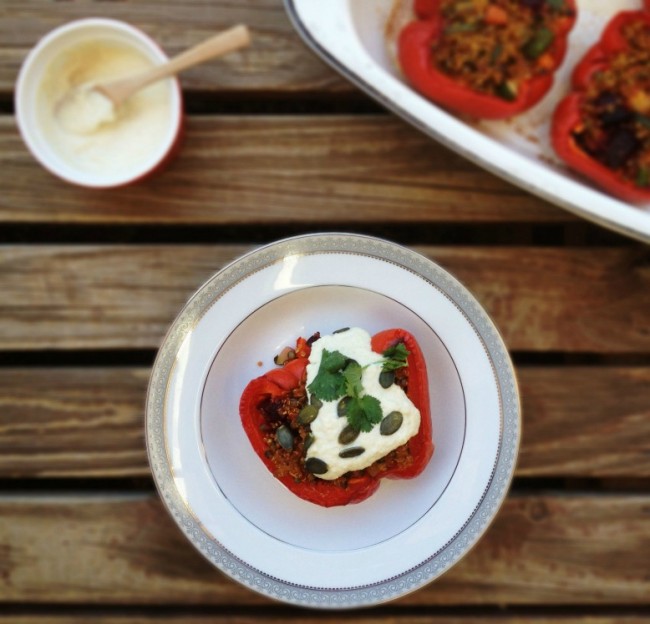 This is a versatile recipe on many levels (see the variations at the end).

Process 3 tablespoons of the lemon juice and half cup of water with the remaining ingredients until you have a smooth-ish, ricotta-like consistency.

If it’s too thick, add the remaining ¼ cup water and process. If you wish, you can add more water to get the consistency you’re after. I like the cream to be a little on the runny side — it goes further and is easier to pour over the pilaf.

Taste your sour cream for seasoning and ‘tartness’. Cashews are naturally quite sweet, so I like to add a bit of lemon juice to mine — it helps to cut back on their richness and sweetness. So add as much lemon juice to your liking, and add more salt if you think it needs to balance the sour–sweet flavours.

In a pot, cook the quinoa in 1¾ cups water, simmering over very gentle heat. The quinoa is cooked when all the water is absorbed and its little white tails have appeared. This will take about 12–15 minutes.

Once you have the quinoa simmering away, cook the French lentils in a small pot with about two cups of water. Cooking time is about 10 minutes when soaked, and about 15–20 minutes, un-soaked. When cooked, the little Frenchies will keep their shape, but yield easily when pressed gently between thumb and finger. Once cooked, drain water and set aside.

While the lentils and quinoa are cooking (remember to keep an eye on them), prep your veggies as instructed in the ingredients list.

Next heat oil/ghee in a large, wide-based saucepan.

Continue to sauté for another couple of minutes.

Add the carrots and cook for 2 minutes before adding the zucchini and beetroot.

Stir continually for about 5 minutes, until the zucchini has softened.

Then stir in the quinoa and lentils.

Season with sea salt to taste.

Serve with cashew sour cream and sprinkle pepita seeds on top, or stuff into peppers and bake (see below).

With a paring knife, gently remove the stem, seeds and white pith.

Stuff halves with the quinoa pilaf (see recipe above)

Loosely cover with foil bake for 45–60 minutes, until peppers have softened. Add more water to the dish if it has dried out before the cooking time.

Remove from oven and serve with dollops of cashew sour cream, and sprinkle with pepita seeds.

Vegan — this dish is already vegan, but you could use any legume that you like, such as chickpeas, instead of French green lentils. Just be aware of cooking times, or used pre-cooked, canned legumes if you prefer.

Vegetarian — toss some crumbled goat fetta throughout the pilaf once cooked, or serve with a dollop of natural yoghurt instead of cashew sour cream.

Nut allergies — serve with a tahini sauce or natural yoghurt instead of cashew sour cream.

Conscientious omnivore — substitute some quality, ethical minced meat (lamb would work well) for the lentils and serve with a dollop of natural yoghurt.

Grain/legume free — substitute quinoa (technically not a grain, but a seed) with cauliflower rice (cauliflower florets blitzed in the food processor into a grain-like texture), and the lentils with mince meat (see Carnivore).

Money-saving — this is quite an affordable meal, since there is no meat. To make it more affordable, you could substitute some basmati rice for the quinoa. And, instead of the cashew cream, serve with some natural yoghurt. Make this dish in summer, when these veggies are in season, and, therefore, are cheaper.

Time saving — cook a large batch of quinoa and lentils on the weekend to use over the week in various dishes, including this pilaf. Make the cashew cream the day before.

Lesh Karan was born in Fiji, has Indian genes and lives in Melbourne. She writes creative non-fiction and poetry. Her work has been published in the Australian Multilingual Writing Project and Cordite Poetry Review. View all posts by Lesh

Speak your mind, but please be kind Cancel reply