On Sunday, 5 November 2017, my husband ran the New York City marathon and I decided to tag along – not on the marathon, but to the City.

Between visits, much has changed. Mostly because my perspective – layered with 13 years’ life experience – and my priorities – now that I’m 2 years shy of, ahem, middle age – have evolved.

Despite my ‘evolution’, my propensity to worry remains. And so you’d be forgiven for thinking that my concern heading into New York would’ve been the terrorist attack that happened 5 days before our arrival. But, no, it was how I would get around in the Big Apple. Yeah, I know.

So, before jet setting, I downloaded the streets of NYC onto a nifty app, which I could use offline and watch the blue dot – me, or to be precise, my phone – traipse the streets, so that I wouldn’t get lost. I even pinned some locations.

It was a heavily misdirected anxiety, I soon realised. New York could be renamed the Grid City – it is the easiest city to get around in, if you can count and know your east from your west. I seemed to have forgotten this fact, along with how I managed to get from A to B without technology to guide me in 2004. Gosh, smart devices can make us so dumb!

In the end, I never used the app. I went old school with a printed map I had picked up from the hotel – ah ha, so that’s how I did it all those years ago – which also had the subway marked on it. I then marked on the map – with a real pen, I tell you! – locations I had looked up online, mostly places at which to eat and caffeinate.

The performance was part luddite and part technophile, and depicts me to a T.

The first time round, I used photocopied pages of the Lonely Planet – because who really wants to lug the whole thing around? – for there was no other choice. Now, however, the technophile part of me took advantage of Google, Yelp, Airbnb and Trip Advisor reviews to help find, say, the best falafel in the Upper West Side (btw, that would be the Hummus Place).

Technological advances aside – and my relationship with it – NYC has, of course, also moved on, despite the survival of 24/7 noise, smells and Sex and the City tours – one of my favourite memories from my first visit (the tour, not the noise or the smells).

The city feels safer, looks cleaner. It’s most likely because of the gentrification of once gang-filled areas like Harlem.

And I can now find Melbourne in pockets of Manhattan, also in hip places like Williamsburg, Brooklyn, where smashed avocado on toast is served alongside a flat white. A pleasing fact, because with age and living in a city that has the best coffee the world, I have developed snobbish taste buds.

Another thing that didn’t exist 13 years ago is the High Line. Which is probably best, as I wouldn’t have appreciated it back then.

The High Line is an old historic freight rail line that’s been turned into a ‘garden in the sky’ with a public pathway that runs through it. And it’s not any old pathway or garden. I discovered plenty of artwork scattered throughout, along with architecturally designed wooden benches upon which to sit and ponder life. 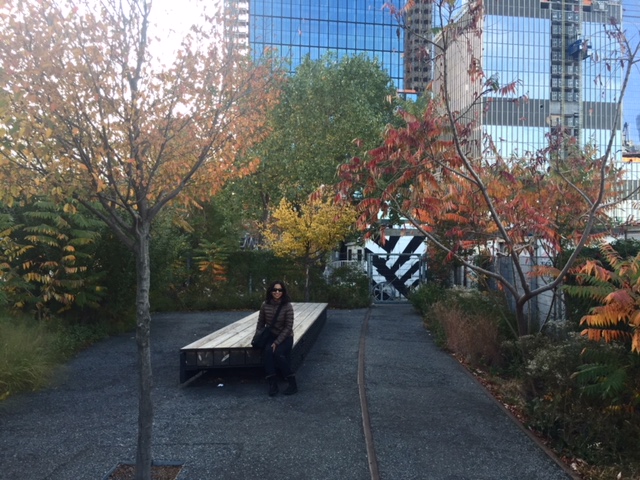 But all that was not its only beauty – the High Line is elevated above the streets of Manhattan, and offered me fabulous views of Lower West Side and the opportunity to meander without having to watch out for cars.

The High Line was one of the very few touristy ‘must-dos’ we did while in the Big Apple, along with a visit to the 9/11 Memorial Plaza, which, of course, wasn’t there 13 years ago either.

We didn’t venture up the Empire State Building, like we had in 2004. Instead, I opted for a cosmopolitan (a nod to Sex and the City) on the rooftop bar of the Empire Hotel – a totally different building, in case you are wondering – to celebrate my husband’s marathon feat. 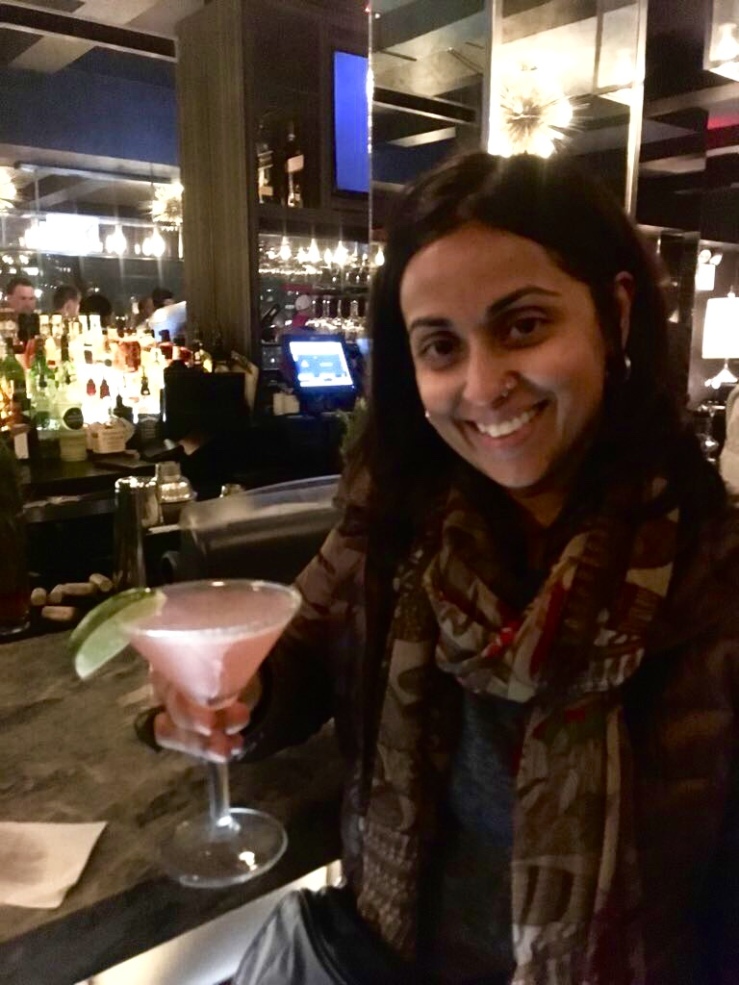 We gave 5th Avenue a miss, on purpose – which meant no Tiffany, where, last time, my husband had insisted we step into, because he sneakily wanted to see which engagement rings held my gaze. He popped the question a month after that trip – not with a Tiffany ring, but with a ring he had a jeweller back in Melbourne make, I am happy to say.

While mainstream shopping no longer holds my attention as it once did – bookshops do, especially independent ones. Two in particular had my heart smiling the whole time I was in there. Both – Spoonbill and Sugartown (what a name!) in Williamsburg and the Tenement Museum Shop in the Lower East Side – stumbled upon while exploring our chosen area of the day, usually decided the day before.

And even though Central Park is on many (every?) New York tourists’ list – I can vividly recall hubby in 2004 with remote in hand, trying to manoeuvre a hired toy boat on the reservoir – this time it took a backseat to the many other patches of green on the island.

Ambling through the farmers’ market at Union Square (we bought locally made hot sauce!), eating at the Bryant Park Holiday shops, hubby playing chess at Washington Square Park for a fiver, and squinting to see the Statue of Liberty from Battery Park were all memorable, serendipitous experiences.

But I have yet to mention the trump card (no, most definitely not of that Trump) I had up my sleeve for this trip – the card that made much of our unexpected adventures possible: locals!

My husband’s two cousins – a brother–sister team, one (M) studying in Manhattan and the other (J) in Boston, and both essentially half our age – enriched and amplified our experience.

Williamsburg and eating out – or looking for a place to eat, even – wouldn’t have had the number of giggles or deep and meaningful conversations (me and M, mostly) that I need to feed my soul. Plus, having locals meant being able to get more intimate with the destination.

But if you don’t have a local of your own – and I don’t recommend grabbing one off the subway – fear not. Like-minded travellers from your homeland can, and do, sweeten the travel adventures.

During this trip, we had snippets of time with folk from the land down under, since the marathon attracts people from the world over.

A catch-up over Melbourne-style coffee the day before the big event with the runners from the run club my hubby belonged to and their supporters, created a happy, anticipated buzz in the atmosphere that I felt right into to my bones.

And because we had booked the marathon part of our trip with a travel organisation specialising in marathons, we had enthusiastic, impromptu chats with Australians – both runners and supporters – in the hotel lobby. You here for the marathon? Yeah, me too. Have you run marathons before? Yeah, wow, that many!

And on the marathon day itself, the cousins and I banded together at mile 14 with many supporters from the travelling group – and with a massive inflated Kangaroo that came on the subway with us – to barrack and cheer our hearts and lungs out.

The marathon was the entire reason we visited, but I hadn’t expected it to be momentous for me – for my hubby’s, yes, but not for me. It was a daylong fiesta, with the whole of New York City being charged with positive energy. Almost 60,000 participants ran through all its 5 boroughs, with supporters from around the globe cheering and ringing cowbells to elate and encourage the runners to complete their feat. And I was a part of it! 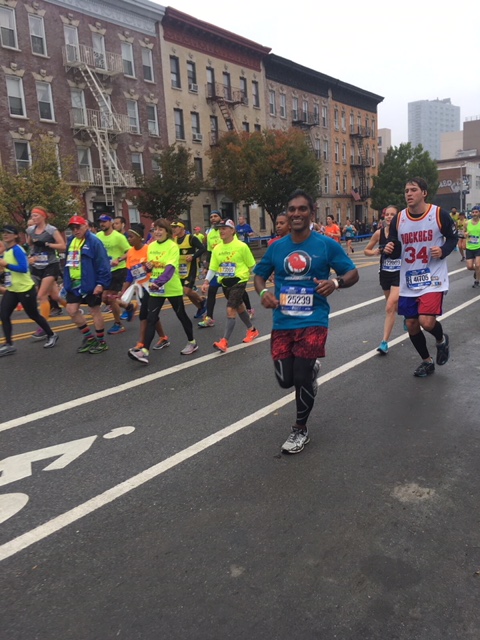 Not only that, but also the marathon along with great company and conversation, good food, and a sense of community with a joint purpose made my New York experience a soul-satisfying one. Something I don’t think would have been possible if I had armed myself with a checklist of things I must do in NYC that I had to cross off.

This trip proved to be the perfect example of why shared joy and being fully immersed (present) in the experience is vital to one’s happiness.

New York, I hope circumstances bring me to your grid-shaped streets again. For you would have changed and so would’ve I – and I’d be able to learn more about myself and relish you with newly gained insight and perspective.

NYC places and things I loved and highly recommend

Lesh Karan was born in Fiji, has Indian genes and lives in Melbourne. She writes creative non-fiction and poetry. Her work has been published in the Australian Multilingual Writing Project and Cordite Poetry Review. View all posts by Lesh

Speak your mind, but please be kind Cancel reply