I first made this risotto in the midst of the winter we have just left in southern hemisphere. It was something that I pulled together with the ingredients I had in my pantry and fridge.

The risotto turned out so delicious that I knew I had to make it again, even if it was just to post about it on this blog! But then a lovely opportunity arose. I was having my girlfriend Jacq over for dinner last Saturday. She loves mushrooms and brown rice. Yes! This risotto had to be on the menu. A loving way to feed my friend  and a warm goodbye to this year’s winter.

In a large, ovenproof pot with lid (I used a cast-iron pot), heat ghee/olive oil over medium heat on the stove.

Sauté onions for a couple of minutes then add garlic and fennel. Sweat fennel for about 5 minutes, before stirring in the rice and lentils.

Add the mirin if using, and when it evaporates off, stir in the soaked mushrooms, mushroom water and fresh mushrooms.

Next pour in stock/water. Bring to a boil, then put the lid on and place pot into the oven.

The risotto will take around 45–60 minutes to cook. After 40 minutes, remove the pot to check the amount of liquid remaining. If it is already at a risotto consistency and the rice isn’t cooked. Add ½ a cup of water (or stock if you have some extra). Give it a good stir, add some salt to your taste and place back in the oven with the lid on. Check periodically (every 10 minutes or so), until the rice is cooked and you have a risotto consistency to your liking. If you need to, you can add more hot water. (I found 5 cups of water enough to cook the risotto, but the amount of liquid can vary depending on soaking times, and the rice and lentils you use.)

Once the rice is done, stir in cashew milk, and salt and black pepper to your taste. 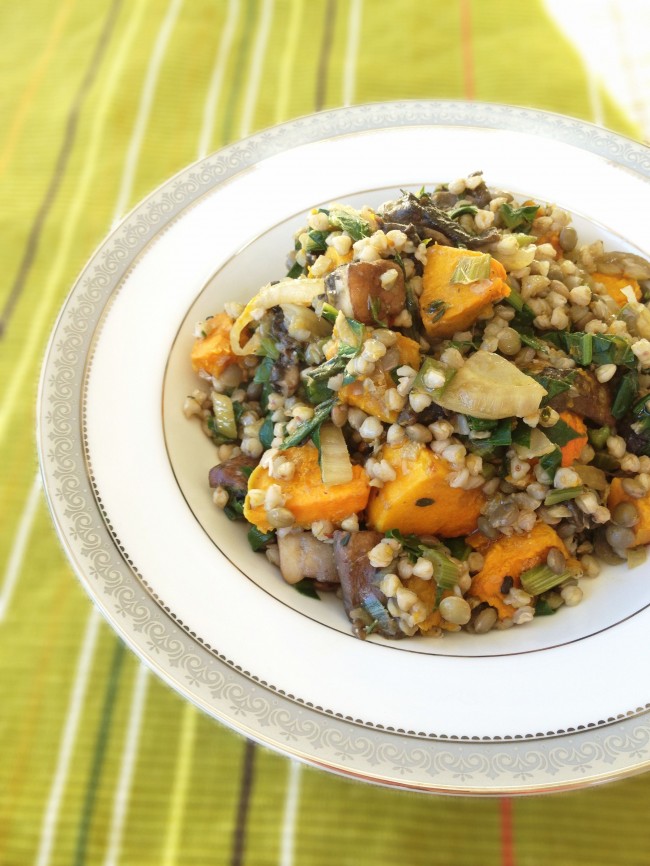 I really didn’t know what to call this dish, so I called it a risotto. But it isn’t one. If I were to cook the buckwheat groat as arborio rice, the dish would be probably be one big mush (perhaps a yummy one, though).

Buckwheat is a funny grain. It belongs to the rhubarb family, and is gluten free (even though it has the word ‘wheat’ in its name). When cooked it has a slightly slippery texture, but nothing that’s off-putting in my opinion. Actually, it’s a great quality to have for gluten-free baking. That’s what I mostly use it for.

Japanese also use buckwheat to make soba noodles. In Australia, Spiral distribute a soba noodle made of 100% buckwheat — a good, nutritious alternative to many gluten-free pastas out there (as they are usually full of starchy flours and gums). Another good option is Orgran’s buckwheat pasta spirals made of 80% stone milled buckwheat flour and 20% rice flour.

While I’ve used buckwheat mostly as a flour, I have used the groats occasionally as a rice substitute for fried rice and in something like this dish. You can also lightly dry roast buckwheat groats before cooking them. Once roasted, buckwheat groats are called kasha. To cook kasha or the groats, add it to boiling (not cold) water. This keeps the grains separate and less mushy.   You can also, like many other cereals and grains, use the groats to make a porridge.

*If you soak the brown lentils for a few hours, or even overnight, they will only take about 15 minutes to cook. You can do this step a day ahead. Or you could use tinned lentils. Just make sure you rinse them first.

Preheat oven to moderate temperature (180C/350F) and line a baking tray with parchment paper. Bake pumpkin for about 20 mins, or until cooked, and set aside till needed.

In the mean time, cook the buckwheat. In a medium-sized pot (with a lid), add the buckwheat and 2 cups of freshly boiled water (or stock). Turn down the heat to a gently simmer and cook buckwheat with the lid partly on. It will take about 15– 20 minutes. Stir occasionally. Set aside until needed.

Once you have your pumpkin and buckwheat ready and have prepped your vegetables, heat 2 tablespoons of the olive oil in a large, heavy based pot. Sweat the fennel for about 5 minutes then add the chilli flakes, garlic and thyme. Continue to sauté for a couple of minutes before adding the zest and mushrooms. Stir continually for another couple of minutes then add the lentils, cooked buckwheat and silver beet. Mix throughly and once the silver beet has wilted add the olives, pumpkin and cashew milk.

Allow the pumpkin and cashew milk to heat through. Turn off the heat and stir in sea salt, lemon juice and remaining tablespoon of olive oil.

It doesn’t matter if you don’t have some of the ingredients. You could use the same process to make your own risotto. Like using brown rice or quinoa instead of buckwheat. You could use any other legume you have in the pantry —such as chickpeas or mung beans. And use up any vegetables you have on hand — like sweet potato, spinach, cauliflower etc. If you’re okay with dairy, you could always add some goats fetta or parmesan cheese. Sometimes I add a dollop of hulled tahini at the end of cooking too. It gives a lovely creamy texture.

Preheat oven to 150C fan-forced (170C conventional). In a large pot (that is also oven-proof and has a lid) heat 2 tablespoons of the olive oil over medium heat. Sweat the celery for about 5 minutes then add the onions, chilli, garlic and herbs. Sweat for another 5 minutes, stirring continuously.

Next, add the sweet potatoes and sauté for another 3–5 minutes before  stirring in the mushrooms, quinoa and legumes. Season with  salt and add stock. Put the lid on and pop the pot into the oven. Bake for 15 minutes, then remove and stir in the broccoli. Place the lid back on and bake for another 15 minutes. Then check whether the sweet potato has cooked through. If not, bake for a few more minutes.

Stir in the remaining tablespoon of olive oil and season to your taste. I also like to squeeze in some lemon juice.

If you liked this post or know of someone who would find it useful, please share it. Sharing is caring.